Italian coronavirus victims over 80 will not receive treatment 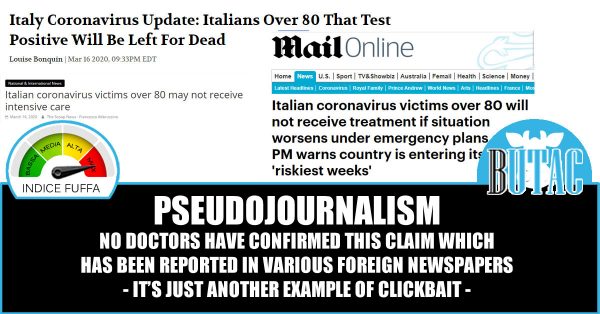 An article published in the Daily Mail was brought to my attention by several of my website readers, and so I decided to write this post as it’s important to counteract disinformation in the media, both at home and internationally.

The title from the Daily Mail:

Italian coronavirus victims over 80 will not receive treatment if situation worsens under emergency plans, as PM warns country is entering its ‘riskiest weeks’

The article claims that, in Italy, patients over the age of 80 will be left to die if the COVID-19 situation gets worse.  This is by no means true, and there is a great risk of creating even further, pointless panic.  It’s therefore important to clarify what is reported in the Daily Mail article.

There is a video that explains how things are going at the moment.  It’s a video interview with Dr Giuseppe Gristina (dated 13 March 2020) in which the doctor is asked three questions, regarding decision-making in hospitals during this healthcare crisis.

In the video, Dr Gristina explains that the idea is to bring together, gradually, as the emergency progresses, all the patients with the same illnesses in the same structures, so that everyone can benefit from the same treatments. He adds that our intensive care facilities are used to treating patients over 75 years old. Italy is a country with an old population, the majority of whom are over 65 years old, and doctors are quite used to providing treatment for this age group.

80-year-olds will not be left to die, and during emergencies, decisions will be made regarding which patients to prioritise.  Such decisions will not be based on their age, but on the potential for the successful outcome of the treatment.  Intensive care facilities in Italy, as in the UK and the rest of the world, are calculated on the basis of the normal, average flow of patients.  An intensive care bed requires expensive machinery, which is purchased according to statistical calculations of necessity.

The problem with CoVid-19 is that contagion occurs very quickly and, in some cases, can lead to interstitial pneumonia which requires intensive care.  Some of the intensive care beds are already occupied by the most serious cases of influenza this year, while others are gradually occupied by patients who are recovering from surgery.  There is not an infinite number of intensive care beds, and when they’re finished priority obviously has to be given to patients who have the greatest need and the greatest chance of a successful recovery. That doesn’t mean they will be the youngest patients.  Decisions will be made on a case by case basis.

According to Al Jazeera, the UK, on average, has fewer intensive care beds available than Italy, which is something that the Daily Mail might wish to consider, rather than writing more and more clickbait headlines.  At the time of writing, according to the WHO bulletin of 15 March, there were 1144 recorded cases of CoVid-19 in the UK, and the Public Health England on 16 March reported that cases had risen to 1543, including 55 deaths.  The WHO insists that further testing is one of the key ways to combat the pandemic, and by 25 February Italy had conducted almost 10,000 tests for CoVid-19, more than any other European country. By 7 March the number of tests had risen to 30,000, and other nations are far behind.  They began testing about 2 weeks after Italy and each country is following different criteria. In Italy, initially, tests were carried out on people with no symptoms who were believed to have come into contact with people who had tested positive for CoVid-19. Not every country has followed the same criteria, due to costs and the limitations of the healthcare system.  In the UK, Prime Minister Boris Johnson has called this the “worst public health crisis for a generation”, but the government is taking far longer than other countries to introduce serious measures to protect the population.

In addition, I would suggest that the BBC use services such as Way Back Machine or Archive.today rather than providing direct links to disinformation websites and helping them to make their fake news go viral by boosting views, increasing advertising revenue and adding undeserved credibility.

If you liked this article, you can support us on Patreon or PayPal!